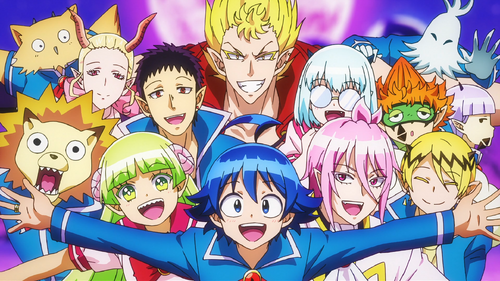 The Abnormal Class (問題児クラス), also known as the Misfits Class, is where the most problematic students assigned to in Babyls Demon School.

The students were branded as abnormal because of their eccentric behaviors and personalities of which some were done by committing assault, harassment, and other violent acts that were expressed since the entrance ceremony.[1] There is a total of 13 students in the classroom, with Naberius Kalego proceeding as their homeroom teacher.

Initially, the group has been regarded to be dangerous, and almost all student body are cautious when interacting with them, but with several developments surrounding and occurring in their class, the treatment for the Abnormal Class has seen to have increasingly become well as the perception and popularity of the changes from "a class of weirdos" to "a class of amazing weirdos" especially well when they got into and acquired the Royal One classroom,[2] as well as defeating the three monsters that assaulted and tried to destroy Walter Park when they visited there.

Initially, the classroom is located underground on a cave, isolated from the rest of the floors in the 1st Year Tower. Its location is ruthless as there's a shared garbage dump on the opposite side of the same floor the classroom is. The image of the classroom is degraded as the other classes dump the garbage on their space instead of putting them straight to the disposal area, as well as making unnecessary graffiti and marks on their classroom wall as a method of stress relief.[3]

Because of the current conduct of their classroom, Iruma and the class decide to acquire a new classroom, the Royal One. Under a difficult strain of proposal that they obtain the transfer approval in less than two weeks, all of the students of the class strenuously worked hard to get support and acceptance of the proposal and with the help of every single faculty of Babyls, including the Student Council (through Ameri), they've managed to get the classroom.[4]