Chapter 1
Episode 1
Babyls Demon School is a prestigious school in the demon world run by the principal, Lord Sullivan, teaching students of both lower and higher status of demon families.

Being in the demon realm, where humans are considered little more than a myth (and in extension their school hymn), the entire student cohort and the teachers (excluding Iruma) are demons.

There are a total number of 666 students currently enrolled in the school, spread out through 6 grades[1]. Iruma's batch (the first year students) consist of 163 students that was then divided into class groups A, B, C, D, and the Abnormal Class.[2] 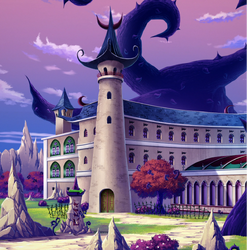 Here are other notable places found on the school: 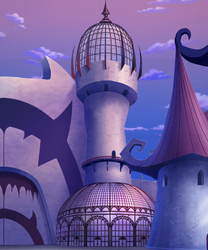 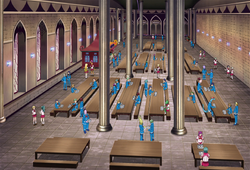 Humans only exist to be our food
Suck them dry, soul, blood, flesh, and all
Tremble at the sound of black wings as we take flight
For we are demons

As this song pours forth from our red lips
Scream for us, for we are demons

For more information, see Demon Ranking System.
Babyls runs off the same ranking system used by Demons throughout the entire demon realm. It is during school that demons can gain their first rank, and continue ranking up, which corresponds to a rise in social status.

Demons of the top rank, Yod, are candidates for the title of "Demon Lord".

The purpose of Divisions (or Battlers Battura) is to gather students of common skills and interests to interact with each other to help improve either magic, knowledge, physical prowess as well as train leadership skills. Depending on how good they perform, they may rise up in ranks. In Alice's point of view, Divisions are groups that concentrate on raising ranks.[3] About 60% of the total population of Babyls' students are engaged in such activities as it is one of the best ways of forging necessary relationships or connections with upperclassmen. There is a Division Tower in the school specifically for such activities. [4] 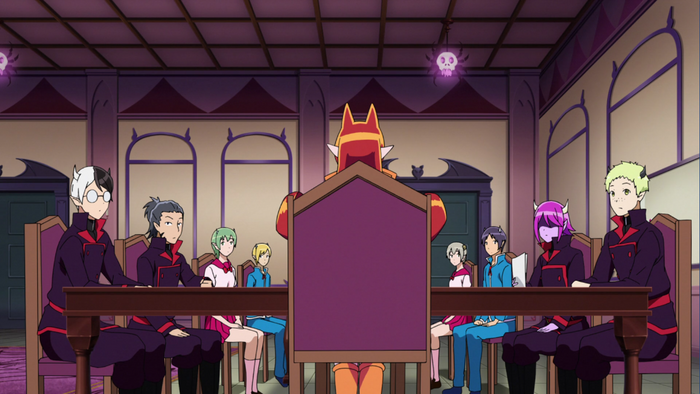 Within Babyls there exists a class-run student council. Even though the Student Council is being considered as a Division, this council mainly oversees a variety of duties, including organization of student events, student discipline and student clubs. The current Student Council President is Azazel Ameri, known for her strict and often violent discipline. School and demon culture can make discipline rather odd; on occasion, students can be lectured and disciplined for causing trouble halfheartedly and punished more severely than if they'd caused more damage. For example, a student has been seen scolded for destroying school windows, but not for bothering to break down the walls.

Retrieved from "https://mairimashita-irumakun.fandom.com/wiki/Babylus_Demon_School?oldid=19249"
Community content is available under CC-BY-SA unless otherwise noted.